As some of you know, the Smoke Stack was sold to a developer who is going to build an affordable housing complex, including a park.  That is very exciting for the citizens of Frankfort and Elberta, for shoppers it’s a sad thing.

The Smokestack was a consignment warehouse. It must have started off as a storage facility though, because it was called Smokestack Storage.

In the summer time you could find treasure there that came from some of the swankiest addresses in the area.  When we first moved here, the Smokestack was in its hay-day.  You could find handmade French dining room furniture, gold pocket watches, old irons, used paint,  screws, dressers, lamps, plates cups, skis, accordions, doors,  shelves, toys, books as well as the sailboat that won the 1925 Chicago to Mackinaw Island race and more and more and more.  The building was pretty dilapidated. It would rain in there, there were critters living in the old sofas and upholstered furniture and you always felt like the roof was going to cave in at any moment.  It didn’t matter, everyone went there anyway.

In winter they would store your boat or car or both there, if you have both    😛
Everyone was so excited when spring came and the doors to Sesame would open again.  Year after year and season after season it was fun to dig in there.  We actually had quite a few guests who came to stay at the Wayfarer specifically to go shopping there.  Nancy L. would come with her girlfriends on the last weekend of the season because then everything in the store would be half off.

So, now it’s gone. They tore it down yesterday.

The Smokestack how it looked a few weeks ago

The brown building in the middle-left and the long building on the right need to come down still. I bet when I go to school this afternoon to deliver 100 cookies to the football team ( yikes)  those buildings will be gone.

Happy Friday everyone.
Tonight’s football game will be played in Frankfort against Manistee Catholic.  Not going to be easy, but we can do it.

Today is Homecoming in Frankfort!

Ty would be in the parade and I had cottages to get ready before 3PM
I made it into town with minutes to spare until the parade started.

I have pictures of every car and float- the parade was over in 5.4 seconds.

As I was driving through Forest Avenue to get to a good parade-watching spot, I spied this:
.

Grand Marshall was the fabulous Kerry Nugent our very own Special Ed teacher
. 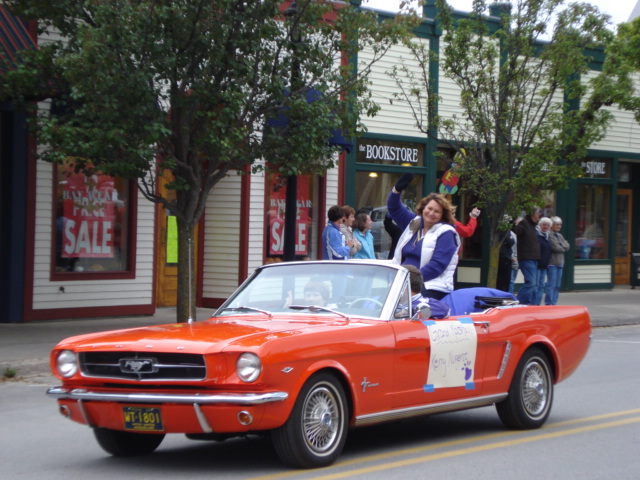 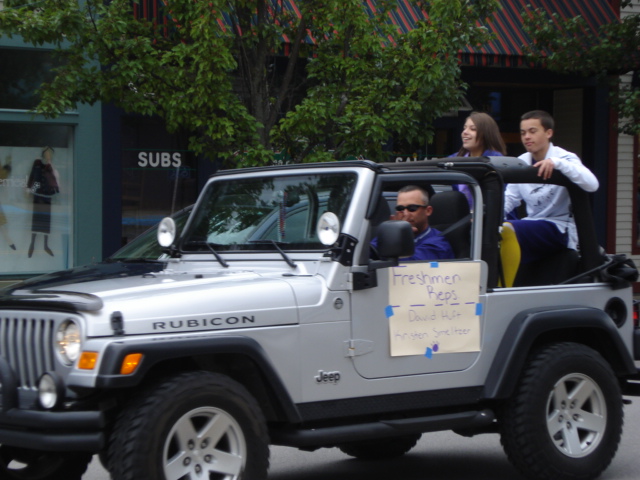 Nancy Tondu driving Gail Nugent’s (Graceland Fruit Nugents)
shnazzy flitzer with Gail’s grandson Danny Nugent
(his mother is the Grand Marshall – small world, eh?)
and a cute girl that I do not know
.

.
Dangit, wouldn’t you know it, I was looking away for a second and I missed
taking a picture of Ty and his buddies on their Kiss float.

So I ran to the car and chased them down, cornered them at the

Elementary School and got a couple of pretty ok pictures
.

Remember to click on the little pictures to see the big picture
.

Jess – used to be Marc’s girl and right next to her, that little brunette is the girl that helped me out here at the Wayfarer this summer

The game against the Suttons Bay Norsemen is at half time as I type this.

Weeeehoooo, we had fun last night!  The first football game of the season

Sechsunddreisig zu zwoelf
(writing the result in German to keep you guessing heehee) The last picture will tell if I got it right, heehee.

This was an exciting game for me, not that I am THAT interested in football, I  cant’ see as fast as they play.  I think I know what’s going on and I cheer and people look at me like I have grown a third eye.  “Oh no”, I must have cheered for something the other team did well – again.
It was fun to see my fellow parents in the stands, catching up with what we’ve all had going on during the summer.

Of course I love to see the kids play their favorite game.  Funny to think back when they started 7 years ago, all of them so small that the helmets made them all look like bobble heads. Their little legs could hardly keep them upright. Where ever that helmet wanted to go, that’s where they went.

Marc isn’t playing this year, he’s had a bad knee injury which put him on the sidelines for the last half of last season.  I think coming to the game yesterday made him think about that decision. He may just join that team after all. We’ll see what he decides.

Without further ado here are the pics

Stephanie not knowing that she’ll be on the blog, heehee

The new score board

while all that football playing was going on, there was also a pretty sky

looking good – the score, not the picture of course 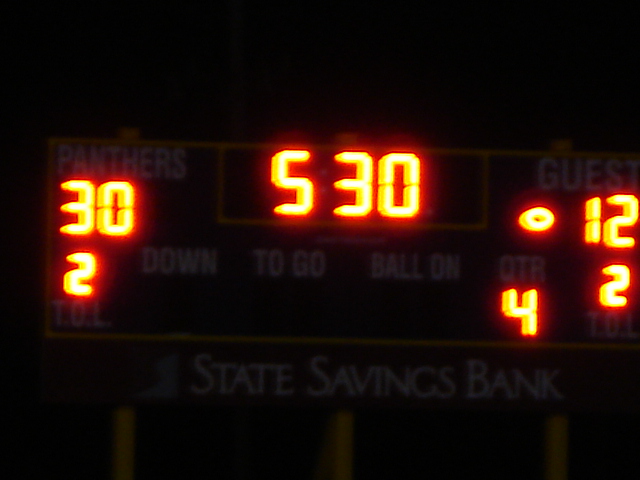 Let’s hope for a good season. Last year we made it all the way up to the Yuper Dome. I wanna go there again.  We had fun in where ever that was 🙂